What stockpiles does the administration have? 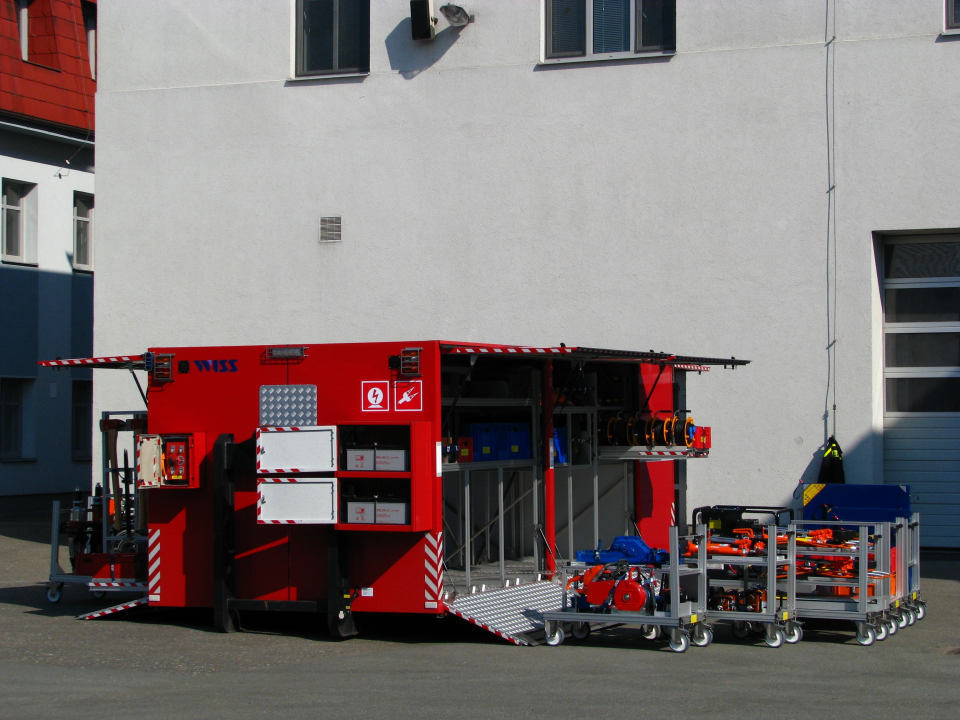 One part of the stockpiles is the things needed for floods. These are, for example, temporary bridges, pumps, dryers, flood barriers, power generators. Then we have technical equipment for extreme drought. This includes tanks and tank trucks for water transport, drinking water treatment equipment, or high-pressure pipelines that transport water to a village in the distance of up to 30 km. We also have stockpiles of crude oil and oil products. If there is a supply outage, we have enough fuel for almost 3 months. And we must not forget the food stockpiles. We have frozen meat, butter, grain, milk powder, canned meat, sugar, cheeses, starch, and other stockpiles.

Is it necessary to pay for the help provided?

How can i ask for help from Czech reserves?

In the first case, you must contact your mayor, who then contacts the State Material Reserves Administration, namely the Economic Measures Preparation Division; tel.: 244 095 325, e-mail: grpsek-OPKS@sshr.cz

For how many days does the Czech Republic have fuel stockpiles?

For how many days does the Czech Republic have food stockpiles?

We currently have food stockpiles for 1 to 23 days. It depends on the type of food. We have larger stockpiles of some food and smaller of other.

In general, the Ministry of Foreign Affairs draws up an annual plan for foreign development cooperation, which is approved by the government. The State Material Reserves Administration (SSHR) then buys and stores them. When the Ministry of Foreign Affairs or the Ministry of the Interior prepares humanitarian aid, they simply ask the SSHR for these stockpiles. In the past, we sent, for example, a temporary bridge to the Central African Republic, blankets to a refugee camp in Macedonia, or milk powder to Syria.

How would the aid reach the people in the event of a crisis?

In the event of a crisis, the government would declare a state of crisis and our warehouses would then open. Our first task would be to provide technology to the Integrated Rescue System so that firefighters and paramedics can save as many people as possible. We have special rescue containers in which all the necessary equipment is in one place. Hydraulic pumps, jacks, and various crowbars. These will help firefighters to save people from the ruins of collapsed houses. In such a case, the refineries would probably not work and the railway would be blocked. So we would free up emergency supplies of petrol and diesel.

We would also build evacuation towns for people who have lost their homes. We have special emergency survival containers with a kitchen, bathroom and toilet. In addition, we also have large tents for 20 people and smaller tents for 5 people, in which the family has more privacy. And we also have other equipment; field beds, sleeping bags, and blankets.

Furthermore, it would be necessary to ensure the supply of drinking water during the crisis. So our drinking water treatment plants, tanks and other equipment would be used. And, of course, it would be necessary to provide food for all evacuated people. We have food stockpiles for 1.3 days of state operation. Unlike oil, the Czech Republic is self-sufficient in this area. We have a lot of supermarkets, agricultural cooperatives and food producers here. So our stockpiles would cover the first onrush before the production resumes.

To do this, it would be necessary to clear roads and build temporary bridges. We have them in our reserves too. As you can see, everything is related to everything and we must be prepared for everything.

In what specific cases has the SSHR recently helped?

Recently, the State Material Reserves Administration has most often helped in the crisis of extreme drought, when the wells of the municipalities dried out in many places in the Czech Republic and there was a threat of the people being left without drinking water. In the last two years, we have helped about 22,000 people in this way.

How do you replace the food to keep it always fresh?

We store most of the food at external protectors. According to the contract, these companies are obliged to always have fresh food in stock for Czech reserves. For example, milk powder must not be older than 10 months or processed cheeses must be replaced with fresh ones within a maximum of 60 days.